Elizabeth “Betsy” Armstrong McNeilly was crushing it in her first year at Rutgers.

Armed with a 4.0 GPA, this hard-working daughter of Irish immigrants was mulling a bold move: transferring to an Ivy League school. She applied to Cornell University, seeking to follow in the footsteps of two older sisters, and was accepted. Then she had a realization. Her goal had always been to get to a school where she’d be surrounded by lots of smart, talented, and highly-motivated students.

She realized she was already attending one.

“In my first year at Rutgers, I met all these impressive students who were the valedictorians at their high schools,” says McNeilly RC’85. “It dawned on me that I was already around all these super smart, incredibly hard-working people.

“There was no need to go anywhere else.”

In my first year at Rutgers, I met all these impressive students who were the valedictorians at their high schools

By her late 20s, McNeilly was managing a credit team at Chemical Bank, and by her 30s she was a CFO at a large, privately-held company. She also found time to earn her MBA in finance from New York University’s Leonard N. Stern School of Business.

Today she’s a Senior Director of Wealth Management at BNY Mellon, one of the nation’s largest wealth management firms. Looking back on it all, McNeilly credits her family, in which she was the youngest of five children, with shaping her work ethic. “My mother was the original tiger mom,” she says. “She knew instinctively that education was the basis for better opportunities.”

At Rutgers, McNeilly built on that foundation in two principal ways.  As an economics major, she gained broad knowledge of the big picture influences on wealth creation, including government policy, politics, and global finance trends, and how human behavior shapes personal outcomes. She also learned how to think critically and extrapolate that knowledge. 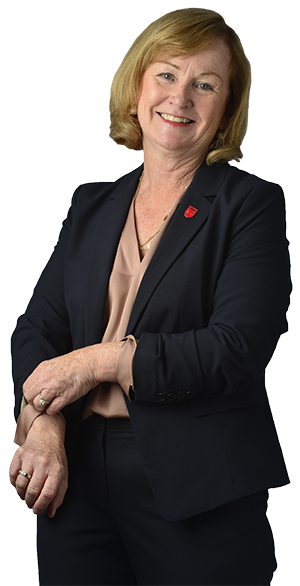 She put those skills to good use. At BNY Mellon, she is a national leader in new business development.

“You have to understand factors influencing the global economy, whether interest rates or market bubbles, to anticipate business cycle booms and busts,” she said.  “My clients appreciate my extensive investment knowledge, but they also appreciate my steadiness and earnest commitment to their financial goals and personal legacy.”

She also said the Rutgers experience encouraged self-reliance and a kind of true grit.

“Here I was at this university with enormous resources,” she says. “But it was up to me to find them and make them work for me. It was very valuable to be your own change agent, to learn how to be resourceful.

“And those are skills I rely on to this day.”

McNeilly is extensively involved in community and civic affairs, including at Rutgers, where she serves on the Rutgers University Foundation Board of Overseers. She is also strong supporter of the Rutgers Future Scholars program.

“Future Scholars is a great program because it brings compassion together with the strong belief that everyone can succeed if they’re given the opportunity, access, and tools,” she says.