Serving in Student Government, He Developed Skills for Success

The 1992 Livingston College graduate spent years developing his talents, starting his career in the pricing department of a major pharmaceutical firm and then attending Boston College for his M.B.A.

But it was as an undergraduate liberal arts student at Rutgers University–New Brunswick that Dalal developed the broad range of analytical, critical thinking, and communication skills that continue to give him an edge in the highly competitive field of global finance. 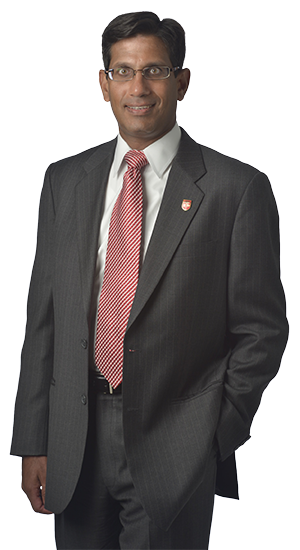 Dalal remains committed to liberal arts. He recently began serving on the Dean’s Advisory Council in the School of Arts and Sciences.

In reflecting back on his undergraduate years, Dalal says one of his key experiences took place outside the classroom: serving as an elected representative to the Livingston College Government Association.

“I was involved in student government at Rutgers from the first possible day to the last possible day,” Dalal says. “That’s where I gained leadership experience, learned how to debate, and practiced expressing my ideas to my fellow students and to university leaders.”

One of his signature accomplishments remains in place today. In the early 1990s, Dalal and two other students went before the Board of Governors to propose changing the name of Kilmer Campus to Livingston Campus.

“To make a presentation to the Board of Governors—that was huge,” he says. “The skills you get from researching, writing, and presenting your ideas can translate to any job you do in the future.”

Dalal grew up in Bergen County and attended Ramsey High School. His parents had emigrated from India in 1968.

“My parents are the true American story,” he says. “They came here with a college education and $500 and they lived the American dream.”

When it came time to enter college, Dalal was interested in business but decided on an education in the arts and sciences. He majored in economics, a topic he found intellectually fascinating and that helped propel him toward his career in financial services. He has been with a global securities firm for nearly 18 years, currently serving as executive director for wealth management.

“Understanding inflation, GDP, and unemployment was very helpful in starting my career,” he says. “And it was at Rutgers where I gained that foundation.”

He also took many history courses and minored in political science, amassing a wide base of knowledge that he still draws upon in his work, which is influenced by global events, like the Brexit vote.

“In my field, every day can bring a new challenge,” he says. “And a well-rounded Rutgers education had prepared me to meet them head-on.”