Finding the Route to Medical School as an Undergraduate

Margarita Borghini got the idea to be a doctor from her uncle, a pediatrician in the Dominican Republic where she was born.

She developed the drive to become a doctor from watching her mother, who moved the family to Passaic, New Jersey, and worked in a garment factory to support her children.

All the tools that I needed to succeed as a premed student were right here.

Borghini found an academic community that nurtured her dream at Rutgers, where she was a liberal arts and sciences undergraduate.

“All the tools that I needed to succeed as a premed student were right here,” says Borghini, a 1993 graduate of Douglass College.

Today, Borghini has a thriving internal medicine practice in Jersey City. She speaks at churches, schools, and on local radio to educate people about health risks.

“A physician should be a public servant,” she says. “And one way to serve people is to make them aware of issues that affect their lives.”

Even before arriving at Rutgers, she had her sights set on medicine. Her first inspiration was her uncle.

“I was sick with tonsillitis, and he would talk to me,” Borghini recalls. “I just admired the way he could connect with patients.”

Her mother, meanwhile, sent her to enrichment programs so she could get ahead of her class.

“There was no question about going to college,” she said.

At Rutgers, Borghini was one of the first students to participate in what is now called the Office of Diversity and Academic Success in the Sciences, or ODASIS. Through the program she was introduced to mentors like professors Francine Essien and Kamal Khan. 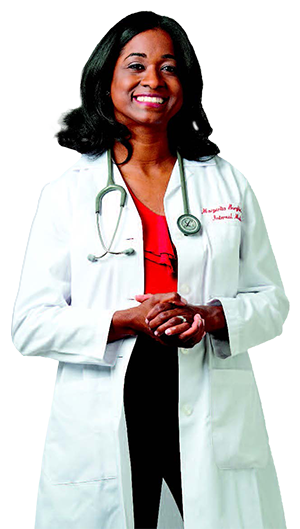 “It really opened doors,” she says. “It was all about providing opportunity for community, for research, and for intellectual growth.”

The value of her undergraduate experience hit home when she attended medical school.

“I had classmates that went to Harvard and Princeton,” she said. “But I was just as well prepared.”