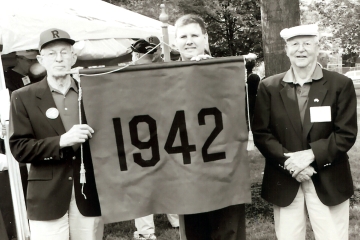 Tom Kindre, founder of the Rutgers Oral History Archives, died on September 11 at the age of 91. I was proud to call Tom my friend. In my 13-years with the archives, I had the opportunity to see Tom's magnetic personality and dedication touch the lives of thousands of Rutgers alumni, faculty and staff.

During the early 1990s, Tom sought to organize his Class of 1942 classmates to write a book about their generation's experiences. He expected each man to submit a piece. "When I got back only 17 responses," Tom recalled, "I knew we didn't have enough material for a book. My next thought was, 'They may be afraid to write, but they might not be afraid to talk.'"

Inspired by the works of Studs Terkel, Tom and his fellow class officers met with faculty at the Rutgers History Department, including visiting professor Stephen Ambrose, about creating an oral history program. With their assistance, Tom and his friends provided the initial funding for the Rutgers Oral History Archives (ROHA) in 1994. Today, the Rutgers Oral History Archives has expanded its scope to include all Rutgers alumni, faculty and staff and New Jersey residents.

Born in Rahway in 1921, Tom won a state scholarship to Rutgers in 1938. He graduated with a degree in journalism and a commission from the Rutgers Army ROTC and served with the 34th Infantry Division in North Africa and Italy, earning five Battle Stars. Tom later worked for Hill and Knowlton, Inc., creating many award-winning corporate advertising campaigns and retiring in 1981 as senior vice president and creative director.

Tom led alumni fundraising efforts for ROHA. In 2002, he became the founding president of the Rutgers Living History Society, an honor society for those who participate in and support ROHA. In 2005, Tom created the Society's Stephen Ambrose Oral History Award, honoring such figures as Tom Brokaw, Steven Spielberg, Studs Terkel and Ken Burns. 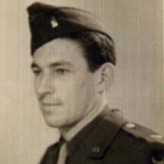 Tom, pictured at right as an army lieutenant during World War II, wrote The Boys from New Jersey (2005), based upon the ROHA collection, and became a frequent guest lecturer on campus, particularly in Professor of History John W. Chambers' senior seminar, "Oral History and the American Experience in World War II." Throughout the seminar, book and his close work with the ROHA staff, Tom brought history to life for hundreds of Rutgers undergraduates.

In 2008, Tom and his classmates created the World War II Memorial Plaza on Voorhees Mall, honoring the Rutgers men and women killed in that conflict. In 2007, the university honored Tom with the Rutgers Medal.

Tom is survived by his wife, Marie Luckhurst; his son, John; daughter, Nancy Luckhurst and two grandchildren, Caroline and Diana.

A memorial service honoring Tom will be held on Sunday, October 14 at noon, at Kirkpatrick Chapel. All are invited to attend.

Tom's vision and hard work brought the Rutgers Oral History Archives to an astounding level of prominence. He was a great friend and mentor and we will all miss him.

-Shaun Illingworth, Class of 2001, is the director of the Rutgers Oral History Archives