Arts and Sciences faculty members are leaders in their fields 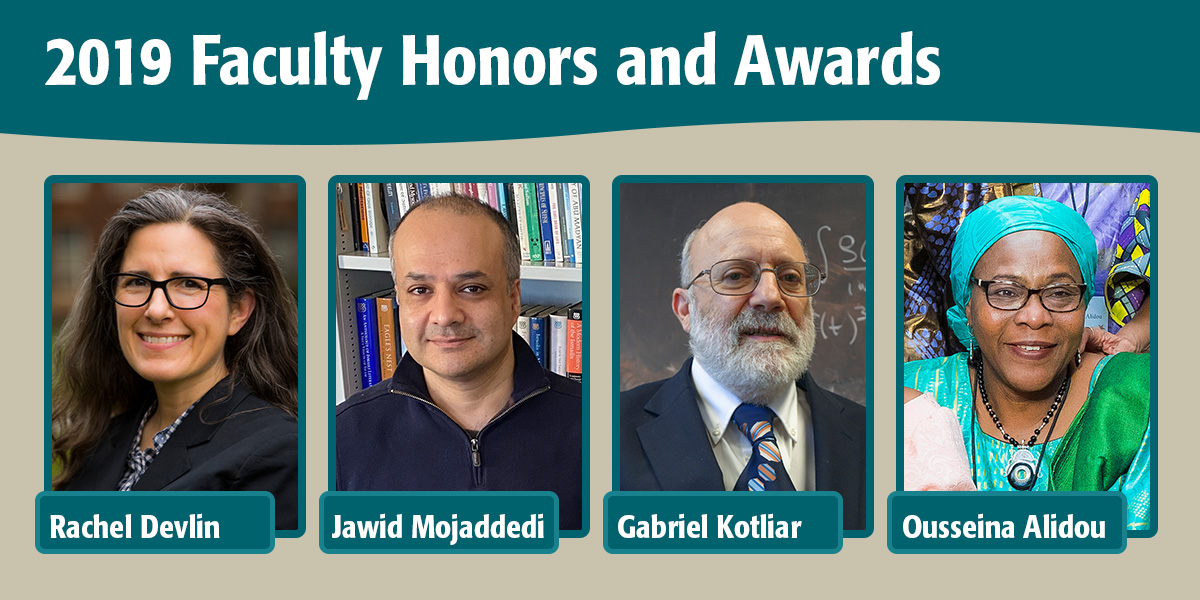 Congratulations to our outstanding faculty! Below you can see the national and international honors and fellowships awarded to faculty across the disciplines of our school.

Do you have an award or good news to share? Please let us know: identity@sas.rutgers.edu

Mridul Aanjaneya (Computer Science) was one of the 36 recipients of the Ralph E. Powe Junior Faculty Enhancement Award, sponsored by the Oak Ridge Associated Universities (ORAU). This is a 1-year grant (June 1, 2019 - May 31, 2020) awarded to junior faculty within their first two years of tenure-track appointment.

Victoria Abraira (Cell Biology and Neuroscience) was named one of the Pew Scholars of 2019. She is only the fourth Pew Scholar from Rutgers in the 71-year history of the program and the first female faculty from Rutgers to receive this honor.

Ousseina Alidou (African, Middle Eastern, and South Asian Languages and Literatures) is the recipient of the honor of a named workshop program series on women and leadership in Africa, “The Africa American Institute Alidou African Women leadership Workshop,” instituted by the African Studies Association of Africa and the United States International University.

Phil Batson (Physics and Astronomy) was honored as a member of the inaugural class of elected Fellows of the Microanalysis Society. He received the 2019 Microscopy Society of America's Distinguished Scientist Award in the Physical Sciences.

Elisabeth Camp (Philosophy) was a visiting professor at Institut Jean Nicod in Paris in June 2019.

Geraldine Cochran (Physics and Astronomy) is the 2019 recipient of the American Association of Physics Teachers Homer L. Dodge Citation for Distinguished Service to the AAP.

James Delbourgo's (History) book Collecting the World: Hans Sloane and the Origins of the British Museum (Penguin and Harvard) has been shortlisted for the Hughes Prize of the British Society for the History of Science, for the best book in the history of science written for a general international public readership.

Yuri Gershtein (Physics and Astronomy) was elected a Fellow of the American Physical Society “for important contributions to searches for physics beyond the Standard Model at both the Tevatron and the Large Hadron Collider, and for developing innovative techniques for precision photon measurement that directly contributed to the Higgs boson discovery."

David Greenberg (History) was awarded a year-long competitive fellowship (2019-2020) by the Leon Levy Center for Biography at CUNY, for a new biography of Congressman John Lewis, for Simon & Schuster.

Saurabh Jha (Physics and Astronomy) was elected fellows of the American Physical Society "for critical contributions to a deeper understanding of Type Ia supernovae, and to their exploitation as cosmological probes."

Gabriel Kotliar (Physics and Astronomy) was elected to the National Academy of Sciences.

Christian Lammerts (Religion) was awarded a Fulbright US Scholar Award to teach for one year in the Department of History, University of Yangon (Burma), Dec 2019–Dec 2020. He also received a grant in 2018 in collaboration with the Buddhist Digital Resource Center from the British Library’s Endangered Archives Program and serves as the Principal Investigator to digitize and catalogue part of a library of Buddhist manuscripts in Nonthaburi, Thailand.

Jawid Mojaddedi (Religion) has been named a National Endowment for the Humanities Fellow for 2020.  His main project will be to complete his translation of Rumi’s Masnavi, a mystical poem in Persian of about 26,000 verses.

Asa Rennermalm (Geography) was selected to be a 2019 Kavli Fellow, by a committee of National Academy members from among young researchers within the US who have already made recognized contributions to science, including recipients of major national fellowships and awards and who have been identified as future leaders in science.

Diana T. Sanchez (Psychology) was awarded the 2019 Distinguished Service Award from the Society of Personality and Social Psychology.

Karen Schindler (Genetics) was the recipient of the 2019 FASEB Excellence in Science Early-Career Investigator Award.

Samah Selim (African, Middle Eastern, and South Asian Languages and Literatures) has been appointed on the jury of the Naguib Mahfouz Medal for Literature, a major award in support of contemporary Arabic literature in translation instituted by the American University at Cairo.

Lyra Stein (Psychology) has received the award for Outstanding Service to the Society for the Teaching of Psychology.

David Vanderbilt (Physics and Astronomy) was elected to the American Academy of Arts and Sciences.

Erin Vogel (Anthropology) was awarded the 2019 Robert W. Sussman Award for scientific contributions to anthropology, from the American Association for the Advancement of Science.

Emma Wasserman (Religion) was awarded a National Endowment for the Humanities Fellowship at the W. F. Albright Institute for Archeological Research for her project, "Beyond Monotheism: Early Christian Myths and Economies of Religious Exchange."

This awards list is compiled from the Faculty Achievement Reports submitted twice a year by departments.  News to be added to this page can be sent to identity@sas.rutgers.edu