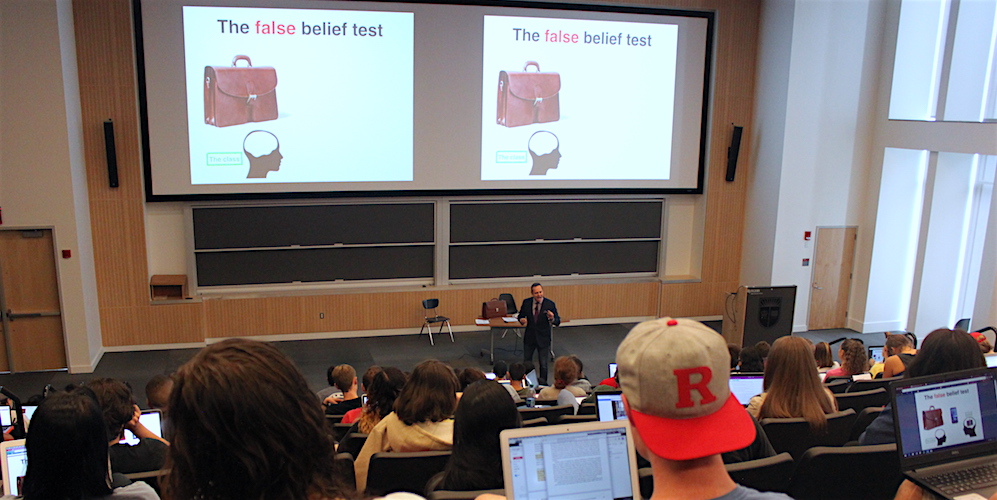 Why do so many Americans disapprove of atheists?

These are some of the questions Professor Julien Musolino poses in “The Religious Mind,” a psychology course in the School of Arts and Sciences that draws nearly 200 students, filling a large stadium-style lecture hall in the Rutgers Academic Building.

“This is a class that really challenges you to learn and apply new ideas,” says Amanda Sullivan, a junior majoring in psychology who intends to become an elementary and special education teacher. “I have always had questions about religion, but I never had a way to frame it to be able to get answers.”

The course is aptly named. Musolino, a professor in the Department of Psychology and the Center for Cognitive Science, is focused on the role of the brain in the development and transmission of religious beliefs. He’s part of an emerging movement of scholars who study religion through the lens of cognitive science, an interdisciplinary field that draws from psychology, neuroscience, and linguistics, among others. 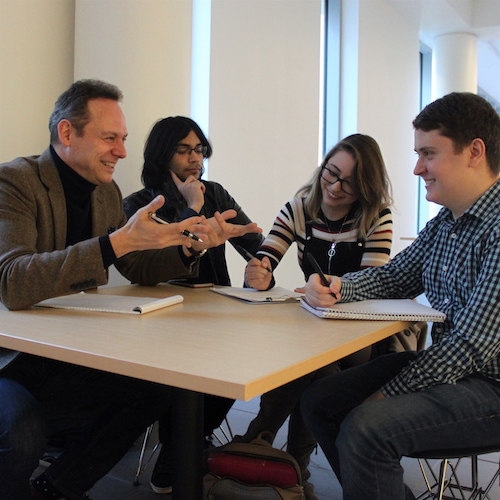 “What we are doing is introducing certain tools and ideas that are going to help us understand how the human mind works,” Musolino tells students. “Then we’ll be able to better understand why human beings have religious beliefs, and we can actually study and test these new ideas in the lab.”

In the course, students engage with the growing body of cognitive science research while drilling down into the social sciences to learn about the influence of religion in American life.

During one class Musolino shared a survey showing Americans disapprove of atheists at far higher rates than they do of Muslims, gays and lesbians, and other groups. Nearly 1 in 2 people said they would disapprove if their son or daughter wanted to marry an atheist.

“Atheists are not well liked in America,” Musolino said. “And it’s related to the fact that a majority of people feel that you have to believe in God to be moral.”

For Musolino, the survey results beg the question: Is belief in God necessary for morality? And that question, he says, can be answered through scholarly inquiry, such as a 2013 study titled Does Religion Make People Moral? by a University of British Columbia psychologist.

The study, which students read and discuss, concludes that although religion can influence people toward good behavior, it is just one factor among many others, including having strong institutions that govern public life.

“This also explains why Scandinavian societies are some of the world’s least religious societies but also the most cooperative and trusting ones,” the study, conducted by Ara Norenzayan, concludes.

Musolino makes no secret of his position on such issues. His book, The Soul Fallacy: What Science Shows We Gain by Letting Go of Our Soul Beliefs (Prometheus, 2015), argues against the existence of the soul. Students read his book as well as conservative writer Dinesh D’Souza’s “Life After Death: The Evidence.” 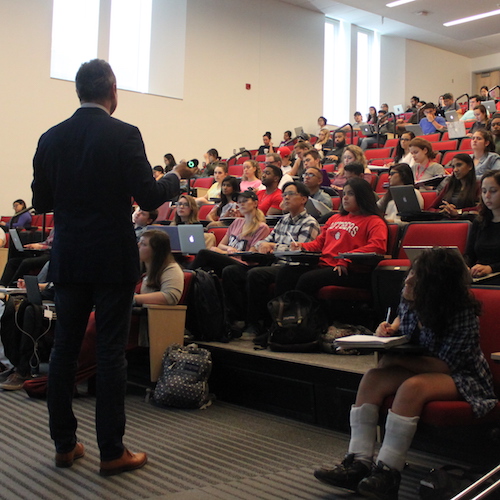 “I’d never come across a college class that analyzes religion from an empirical scientific perspective,” says Veit, a transfer student from Brooklyn College who intends to major in psychology. “I spent most of my life around religion and I want to understand those beliefs from the psychological perspective.”

Junior Claudia Brzoza grew up in a Catholic family in Poland. She was curious about the course, sat in for the first class, and became “hooked,” she said.

“I started in the back of the class and now I’m in the second row,” she says. “It challenges me and the way I was brought up. But I have always been a person who looks for facts, and I think as students, we need to be challenged to think critically.”

Devin Sosa, who attended Seton Hall Preparatory School, a Roman Catholic high school, enjoys the course but has occasionally emailed Musolino to let him know he disagrees on some points that come up in class.

“Catholic theology actually offers a lot more depth versus what your average churchgoer might learn by going to worship services once a week,” says Sosa, who is triple majoring in psychology, sociology, and philosophy. “I find this course really insightful but at the same time, I think there is a lot from theology that’s interesting and philosophically profound.”

Musolino said he expects students to disagree and encourages them to form their own arguments and test them. 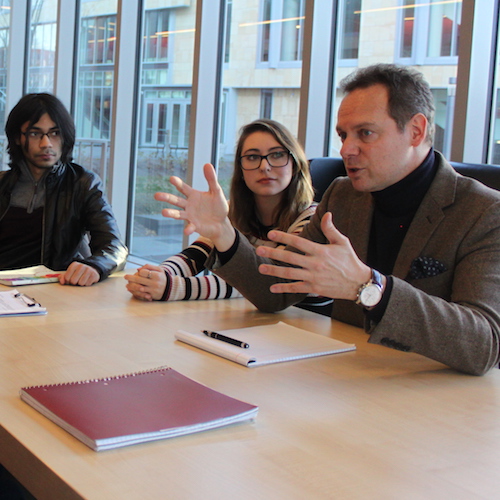 “I love the fact that Devin took the time to think about what we had said in class and send me his thoughts,” he said. “It was a nice intellectual exchange.”

In addition to the two books, students read and absorb a range of scientific studies that have been carried out over the last several decades.

Those studies examine religious beliefs as a natural and predictable product of normal cognitive processes. One paper, for example, looks at children’s preferences for “teleological” explanations of the natural world, or explanations that ascribe a purpose to phenomena. Another study found that cognitive style—intuitive versus reflective—can play a major role in whether one believes in God.

“What we’re finding is that religious beliefs are generated by a completely ordinary cognitive system,” Musolino says. “We have religious thoughts because we have human minds and we very naturally come to these thoughts. There is no “God gene” or “God module” in the brain. We have certain mental capacities that evolved independently, and for reasons that we now understand much better, also happen to make us very prone to belief in supernatural entities.”

“I like learning about the experiments and seeing the actual evidence,” says Barstein, a junior. “It’s really interesting for me to know the psychology behind why people are religious.”