Returning from Military Service, a Rutgers Student Enlists in the Battle against Covid19

"This was something I had to do" --- Sean McCauley 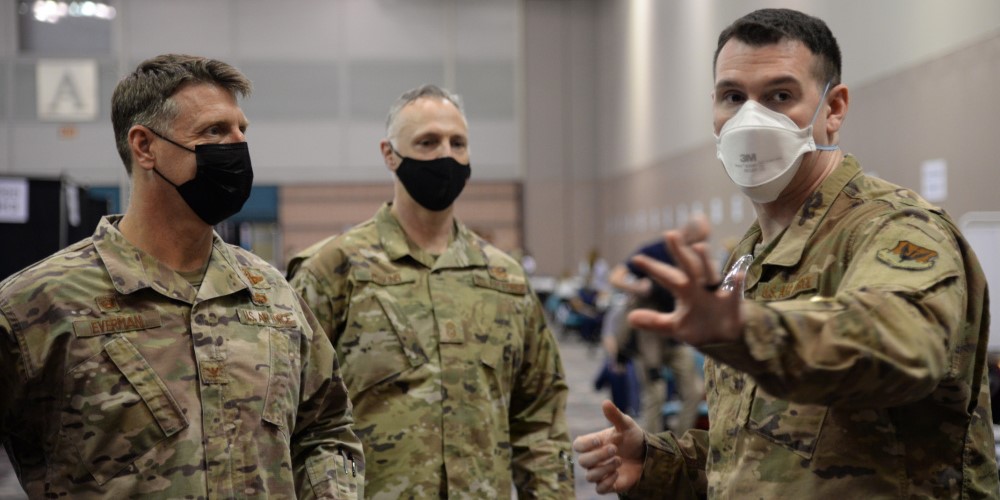 Rutgers graduate student Sean McCauley was busy raising a family, working on a master’s degree, and teaching history at a New Jersey high school when he decided earlier this year to join the front lines in the battle against Covid19.

McCauley, serving in his capacity as a captain in the N.J. Air National Guard, helped lead two key missions, providing operational support at a South Jersey veterans home and at one of the state’s major vaccination sites.

“I had discussed it with my wife, and we agreed this was something I had to do,” the 34-year-old McCauley says. “This is for the betterment of everyone—the veterans who deserve to live in comfort and safety, and the citizens seeking safe and convenient access to vaccination.”

My overall goals are to provide meaningful impact to the community

McCauley took a leave of absence from his teaching position at Bayonne High School to spend weekdays working at the two locations and staying nights at a hotel. He continued his studies virtually in the M.A. program in United Nations and Global Policy Studies (UNMA) in the School of Graduate Studies.

Prior to entering Rutgers, McCauley worked for six years as a teacher, followed by four years as an officer in the Air Force where he flew 118 combat missions in Afghanistan. Returning to civilian life in the fall of 2020, he resumed his teaching career at Bayonne and entered the UNMA, which seeks to prepare students for engagement with global issues roiling the world, such as terrorism, climate change, and economic inequality. The program is led by Eric Davis, a longtime professor in the Department of Political Science, School of Arts and Sciences. 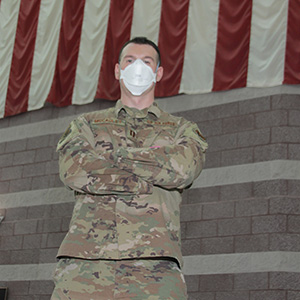 McCauley said that after finishing the program he wants to continue working in education but is also considering a role in government service, possibly as a policy expert or as a candidate for elected office.

“My overall goals are to provide meaningful impact to the community, whether that’s through education, volunteerism, or policy initiatives,” he said. “I am open to whatever comes my way. I like change. I like being challenged, which is why the mission I am on with the COVID is such a fantastic experience.”

At the Vineland Memorial Veterans Home, McCauley has been the Officer in Charge since March, implementing the state’s Covid19 guidelines and supporting a diminished staff devastated by the pandemic. McCauley and his unit handle an array of tasks, including helping with temperature checks, rapid testing, and transporting patients from one area to another.

The facility is New Jersey’s oldest continuously operating veterans home and houses about 250 residents. Eleven residents died from the coronavirus, according to the state Department of Military and Veterans Affairs. By June, however, the home was on the rebound, with residents able to move about more freely and enjoy outdoor visits. The bowling alley was reopened, and karaoke nights resumed.

The mission was a particularly poignant one for McCauley, whose late father, James Robert McCauley, was a Vietnam veteran in the U.S. Army.

“It has been a tough year for these folks who haven’t been able to see their families, or even get a hug,” he said. “It was an honor for me to serve them.”

McCauley also worked from January to May as Assistant Director of Operations at one of the state's major vaccine point of distribution sites at the Atlantic City Civic Center. McCauley and his fellow guardsmen in the 177th Fighter Wing worked alongside AtlantiCare to set up and run an operation that at its peak was vaccinating 4,000 people daily.

McCauley grew up in Bayonne and received his bachelor’s degree from Jersey City University. He enlisted in the Air Force as a commissioned officer, entering the military as an intelligence analyst at Wright Patterson Air Force Base's National Air and Space Intelligence Center in Dayton, Ohio. He holds two other master’s degrees, one in educational leadership from Western Governor’s University, and another in military strategic intelligence from the National Intelligence University.

McCauley sees the UNMA program as an opportunity to develop expertise in international affairs that will benefit his teaching and prepare him for the global arena should he decide to pursue politics.

“There is no other program like it,” he says. “The direct engagement with the UN gives you amazing access to all of these global policy issues.”

McCauley’s family has a decidedly scarlet hue. His wife Mona McCauley SAS’13 majored in English and earned her master’s degree from the Graduate School of Education. The couple have two children.