Please join Peter March, Executive Dean, Rutgers School of Arts and Sciences, for a film screening and panel discussion with the film creators. 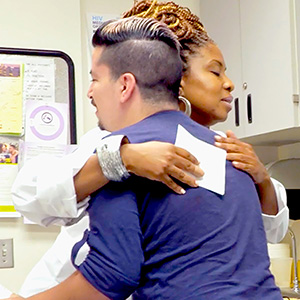 Target Zero is a documentary that shows the challenge and emotional complexity of the fight to control HIV infection. It features real-life patient stories, state of the art molecular animations, and interviews with medical professionals and scientists. These accounts illuminate the history of the HIV epidemic and reveal the ongoing need for compassionate, patient-centered care and a true understanding of the science behind the treatments.

Target Zero is a collaborative effort among scientists, physicians, patients, artists, and film makers at RCSB Protein Data Bank, Rutgers University, University of Utah, and the University of Southern California.

For more information about Target Zero visit the documentary website.

Eddy Arnold, PhD
Board of Governors Distinguished Professor of Chemistry and Chemical Biology at Rutgers University who conducted pioneering HIV research leading to the discovery and development of two FDA-approved drugs. Dr. Arnold continues to pursue research on the fundamental biology of HIV with a focus on the reverse transcriptase enzyme.

Jed Dannenbaum, PhD
Executive Producer and Professor of Practice Emeritus at the University of Southern California School of Cinematic Arts. A story consultant and nonfiction filmmaker, he has dozens of nonfiction film credits as a writer, producer and director, and was co-author of the Simon and Schuster book Creative Filmmaking From the Inside Out.

Michael Gottlieb, MD
Los Angeles-based physician who was one of the first people to identify AIDS as an immune deficiency disease. A Rutgers alumnus, Dr. Gottlieb was one of the leaders in the HIV/AIDS research and activism that led to a robust national response to the epidemic.

Mary Posatko, MFA
Director and Producer. She is on the faculty at the University of Southern California School of Cinematic Arts. She directed and produced several documentaries and short films, among them the critically-acclaimed Ain’t in It for My Health: a Film about Levon Helm.

Alice Stek, MD
Assistant Professor of Clinical Obstetrics & Gynecology and Director of Perinatal HIV Services at the USC School of Medicine. Her current research focuses on the use of antiretroviral medications in pregnancy.