Join us for the Grand Opening of 1 Spring Street 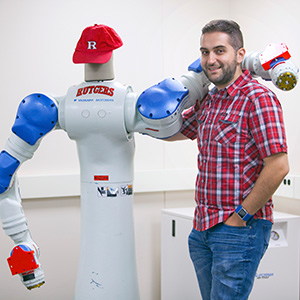 Executive Dean Peter March invites you to the Grand Opening of the new innovation center for arts and sciences in downtown New Brunswick.

Visit the new robotics, language, and psychology labs to see demonstrations and ask questions about research.

Free commemorative gift for the first 100 guests through the door.

NEW BRUNSWICK - The Rutgers University School of Arts and Sciences will soon have a powerful presence in downtown New Brunswick.

The school, the largest academic unit at Rutgers University–New Brunswick, is moving some of its most innovative projects and operations to an office building at 1 Spring Street.

The move will bring an influx of university employees, both faculty and professional staff, to the downtown area, along with a myriad of initiatives—including some with a strong public health focus—from a psychology lab that examines underlying factors for nicotine addiction, to language processing studies involving autism, to research on the genetic disorder Tourette’s Syndrome.

Also coming to the building are a robotics lab, the Rutgers Oral History Archives, and The Language Center.

The school will be hosting an open house on August 29 to introduce itself to the city and give demonstrations of some of the projects that will be in the building. Attending the event will be New Brunswick Mayor James Cahill, Rutgers University–New Brunswick Interim Chancellor Chris Molloy, and other Rutgers leaders and renowned researchers.

The demonstrations will highlight the university’s research in robotics, psychological approaches to smoking cessation, and oral history interviews with New Jersey citizens. In addition, attendees will also get to see The Language Center’s sophisticated videoconferencing systems that allow Rutgers students to take courses at other Big Ten schools without ever leaving campus.

The School of Arts and Sciences offers majors and minors across the academic spectrum and has roots that go back to Rutgers’ colonial beginnings. The vast majority of the school’s day-to-day teaching, research, and service will continue to take place on the Rutgers campuses in New Brunswick and Piscataway.

“We are bringing a microcosm of arts and sciences to downtown New Brunswick,” said Peter March, the school’s executive dean. “This is an exciting development with many benefits for the school and for the city.”

March said the move helps the school solve persistent space shortages on campus while also making some of its projects more accessible to the public.

“Many of the units coming into the Spring Street location work directly with the public,” March said. “So rather than bringing folks out to some far corner of campus, we now have a centralized location for them to come.”

That’s a particularly beneficial change for the Rutgers Oral History Archives, which records the stories of New Jersey citizens, including many elderly veterans. Shaun Illingworth, the director of the archives, says the new location has parking for his interviewees, better acoustics, and more room for students working with him.

“This is going to make us a better resource for the people of New Jersey and the university community as we broaden the scope of our program to include more people around the state,” Illingworth said.

The new site brings intellectual capital and capabilities that complement the plan by city and state officials to build an “innovation hub” in New Brunswick. The Spring Street location is adjacent to the construction site for a proposed science and technology research center. Eventually, March says, he wants the Spring Street building to function as an incubator for students developing their own innovations.

“As Rutgers’ largest school, we welcome the vision for an innovation hub in New Brunswick,” March said. “We come as like-minded and supportive neighbors bringing our own hub.”

New Brunswick photo above by William A. Paxton, 2012