Janki Patel says that majoring in art history was a wonderful way to learn about life, understand the human experience, and gather the skills to navigate the contemporary world. "I learned an analytical approach that I can now carry over to any situation,” she said. “I can break down something to its basic values, whether it’s a piece of art, a social situation, or a workplace issue. 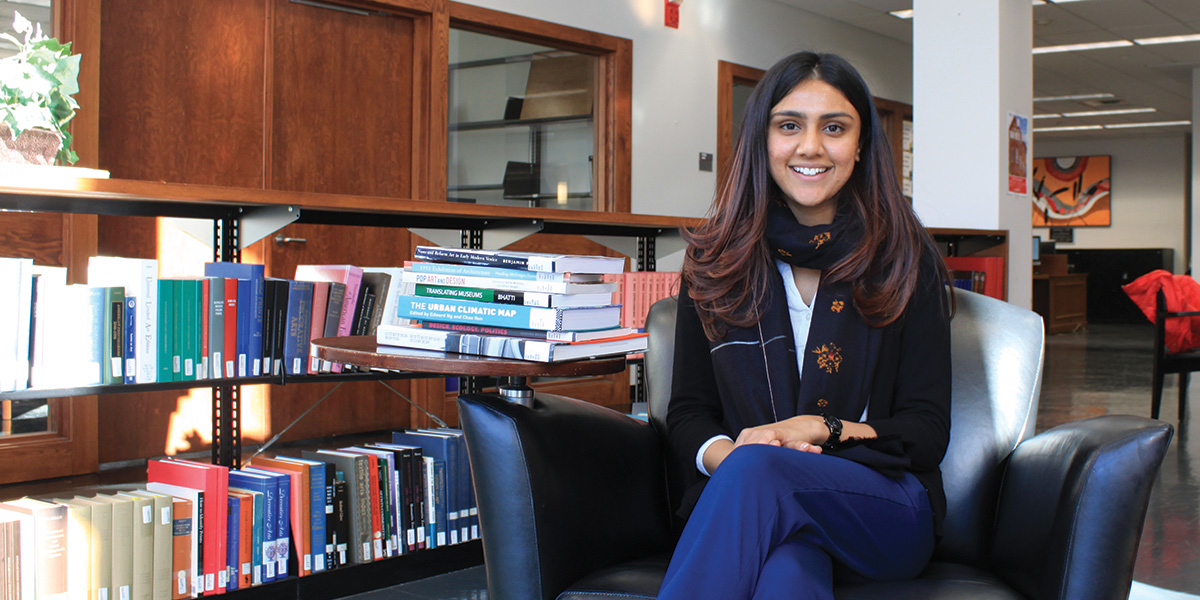 All it took was a single, 100-level course for Janki Patel to decide on a major and begin seriously contemplating her calling in life.

Patel was a first-year student at Rutgers University–New Brunswick when she decided to sign up for “Introduction to Western Art History.”

“I was exploring possibilities,” the SAS’18 graduate says. “I took this course and everything fell into place.”

It wasn’t solely the content—a survey of major art movements through 1400—that inspired Patel. It was the intelligence, verve, and historical sweep that faculty members John Kenfield and Mieke Paulsen Bahmer brought to the classroom, covering everything from ancient Mesopotamia and Persia to European Gothic.

“They presented it with such authority, knowledge, and grasp,” Patel says. “I wanted to fashion myself in the same way.”

I can break down something to its basic values, whether it’s a piece of art, a social situation, or a workplace issue. Art history gives you the tools to interpret your surroundings.

She went on to major in art history and German, crafting an expansive and adventurous undergraduate experience. She did two Study Abroad stints, took an array of compelling courses, and found a community of like-minded students in the Rutgers Art History Student Association.

She graduated feeling poised, confident, and skilled. She also has a full time job at the Pratt Institute.

“As an art history major I had to develop an analytical approach that I can now carry over to any situation,” she said. “I can break down something to its basic values, whether it’s a piece of art, a social situation, or a workplace issue.

“Art history gives you the tools to interpret your surroundings.”

Growing up in both India and New Jersey, Patel always enjoyed art and did her own painting and sketching.

“I had training as an artist,” she says. “But I was more inspired by what artists had previously done. That is what I wanted to study.”

As an art history student, her academic palette was broad. She learned about fields such as architecture and typography, studied the work of seminal figures like the Russian avant-garde artist known as El Lissitzky, and pursued intellectually challenging themes such as the intersection of art and technology.

In the summer following her sophomore year, Patel traveled to Europe for a Study Abroad program under Jewish Studies professor Nancy Sinkoff that examined Jewish life in Poland, including in the Warsaw and Krakow ghettos during the Holocaust. The following year Patel took an intensive German program at the Free University in Berlin.

She often found that one educational experience would open up a door to another.

Traveling in Europe, for example, she found herself deeply moved by a visit to the famed Maison D’Verre (House of Glass) in Paris, an architectural marvel built with steel, glass, and glass block.

“When I went to see that house, I fell in love with architectural history,” she said.

Upon returning to Rutgers, she signed up for an interdisciplinary class that included a unit on the Maison D’Verre and an opportunity to write a research paper on the subject. But the course taught by Anette Freytag, titled “Gesamtkunstwerk—Total Work of Art: When Life and Art, House and Garden Become One,” opened up new possibilities.

“Gesamtkunstwerk is a utopian concept to transcend the daily life of people and make them better human beings through art and high quality craftsmanship,” Freytag explains in the syllabus.

“We would go see Madame Butterfly and Parzival,” Patel says. “It was this amazingly enriching concept in which music, art, and life become one.”

Meanwhile, Patel’s involvement in the Rutgers Art History Student Association provided a vital opportunity to unpack all of these experiences among friends and colleagues.

“It’s all these art nerds coming together,” she quips. “But it’s incredibly important, because as art history students we crave context. We want to talk about the exhibition we’ve seen, or the performance we watched or the book we read.”

Shortly after graduating, Patel landed a job as a program assistant for education abroad at the Pratt Institute, a private university in Brooklyn known for its highly-ranked programs in architecture, interior design, and industrial design.

In her spare time she is conducting her own study of architecture in the Hudson Valley and planning for eventual entry into graduate school. Although she hasn’t decided on a single career path, she notes that there is wide range of possibilities for art history students, from archiving to data management to museum and libraries to preservation. Some of her classmates are going to law school to pursue art and culture law.

“My undergraduate years taught me many things,” she says. “And one of the most important is to seek out and find what I am passionate about, and stick to it.”