Studying Japanese and Korean in the Rutgers School of Arts and Sciences Department of Asian Languages and Cultures, Nicole Oliver is preparing to open an English language school in Japan when she graduates. 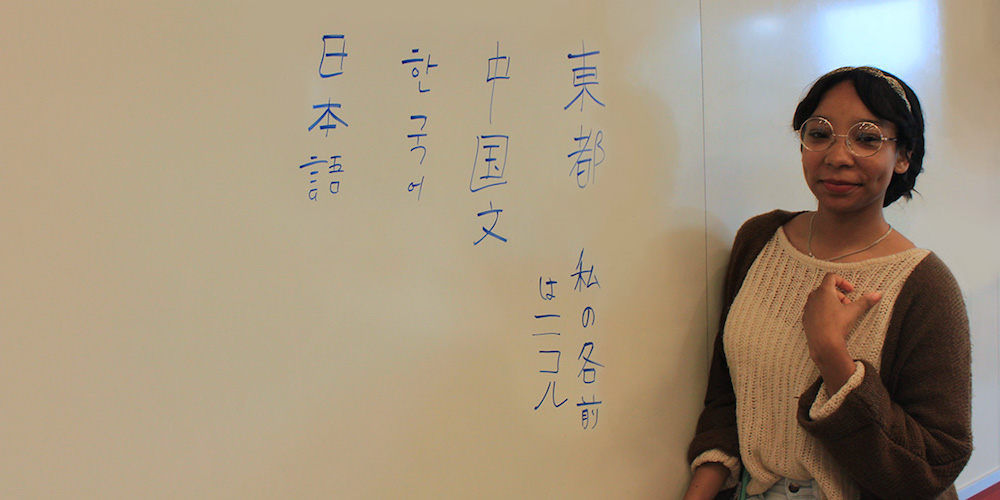 A childhood passion opens the door to cultures around the world

Nicole Oliver has long been a fan of the Japanese animated film style known as anime.

“In the early 2000s, Saturday morning television was filled with Japanese cartoons,” the School of Arts and Sciences junior says. “I loved Japanese animation and so did my family.”To be able to sit there and converse with all the fans and watch the entire movie without missing anything was one of the biggest events in my language learning experience

Over time, she became impressed with the depth and complexity of anime plot lines and characterization. She set a daunting goal for herself.

“I got tired of waiting for the subtitles,” she said. “So I thought ‘why not study Japanese?’’’

She did just that, watching shows and writing down commonly-used words and their definitions in a little notebook.

“Words like 'I,' 'cute,' or 'what' were quite easy to learn because context was always clear,” she says. “In a way it was like immersion. Not only was anime my motivation for learning Japanese, it was also my teacher.”

After ninth grade, her family moved to Princeton. And at Princeton High School, she began taking formal courses in Japanese as well as in Chinese and Korean.

She knew all her efforts had paid off when she watched the 20th anniversary installment of the Case Closed series, also known as Detective Conan, without having to refer to subtitles.

“To be able to sit there and converse with all the fans and watch the entire movie without missing anything was one of the biggest events in my language learning experience,” she says.

Oliver transferred to Rutgers after two years at Temple University’s campus in Tokyo where she studied graphic design.

“When I moved back to America, I realized I wanted to continue studying Japanese, Korean, and Chinese,” she says. "I am so grateful to have found the Department of Asian Languages and Cultures at Rutgers."

The department, which recently celebrated 50 years of Chinese studies at Rutgers, is a major center of scholarship that reaches across the literary, cultural, and linguistic expanse of East Asia. It’s also the ideal place for a dedicated student like Oliver, who’s fascinated by both language and culture. She’s now majoring in East Asian Languages and Area Studies with a concentration in Japanese and a minor in Korean.

"The main reason for my interest in Japan is not just the anime, but the things I learned about Japan through the anime," she says. "I just fell in love with the country and its culture, traditions, beautiful places, and people."

In the short term, Oliver is participating in a Study Abroad program at Ritsumeikan University, a prominent private university in Japan where she will be focusing on developing advanced language skills. After completing her degree at Rutgers, she ultimately plans on returning to Japan and starting an English language school.

“When I was in Japan I taught English as a part-time job and I enjoyed it so much that I decided I wanted to have my own school,” she says. “I came up with my own curriculum. My students all passed their tests. It was great.”