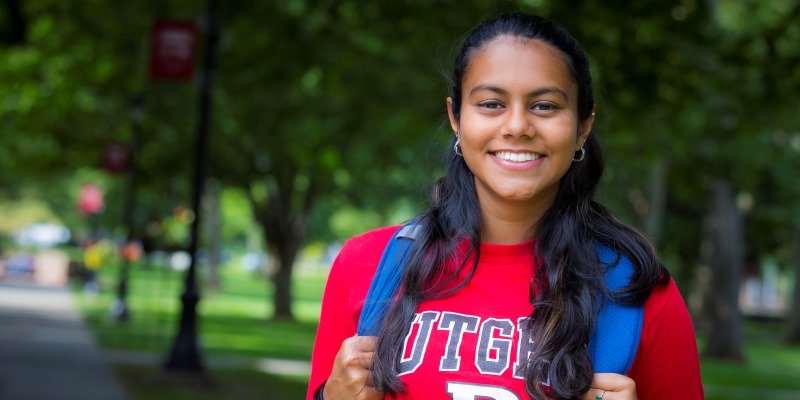 She graduated from Biotechnology High School in Freehold, New Jersey, a magnet school where the academic program is intensely focused on biology, technology, and engineering.

But it was at Rutgers, in the W. M. Keck Center for Collaborative Neuroscience, where Rami found the calling that would drive her research and exert a profound influence over the direction of her undergraduate work.

I remember taking my seat in the conference room, listening to Dr. Young’s lecture, and just being drawn to the work of the Keck Center

That calling was spinal cord injury, a devastating condition that blocks communication between brain and body, leaving patients paralyzed and needing help with everyday tasks such as eating, dressing, and going to the bathroom.

Entering Rutgers, she knew little about spinal cord injury, and had never met anyone living with the condition. Then she attended a lecture for undergraduates given by Wise Young, an SAS professor of Cell Biology and Neuroscience who is the founding director of the Keck Center, and one of the world's foremost experts on spinal cord injury.

“I was trying to decide where I should do research, and I was looking at different facilities,” Rami says. “I remember taking my seat in the conference room, listening to Dr. Young’s lecture, and just being drawn to the work of the Keck Center.”

She was impressed by Young’s vision for treating spinal cord injury and the down-to-earth way he explained his work to students. She was also struck by his emphasis on collaboration.

“I was coming from a very competitive environment,” she said. “And listening to Dr. Young, you get the sense that research is more than a competition. It’s a life mission.”

The full scope of that mission hit home when Rami started doing undergraduate research at Keck.

She worked in the lab but also became part of the larger community that Keck has helped build over 20 years—a network that stretches beyond the university and includes patients and their families from throughout the region. Every month, the center opens up its doors to the public, drawing dozens of people in wheelchairs and their loved ones who come to learn about the latest research.

“I think what differentiates the Keck Center is it’s a place where you get to see who your research touches. You never forget what it’s all about. It’s always about the people.”

Rami has worked on various research projects at Keck, including one that examines the role of the immune system in spinal cord injury. Rami was also selected as the student speaker at the 30th anniversary of the Douglass Project for Rutgers Women in Math, Science, and Engineering.

Last spring she and another student travelled with Dr. Young to Taiwan where they presented research at the Pan Pacific Symposium on Stem Cells and Cancer Research. That trip, as well as her Study Abroad mission last summer to Peru, where she volunteered in a clinic, has raised her interest in international healthcare as career.

After graduating, she’s considering going for an MD/PhD.