Mark Hansen, seen here in his New York City apartment, was featured in the New York Times for starting Hey Mayor, a bot he hopes will bring 311 systems to small cities around the country. 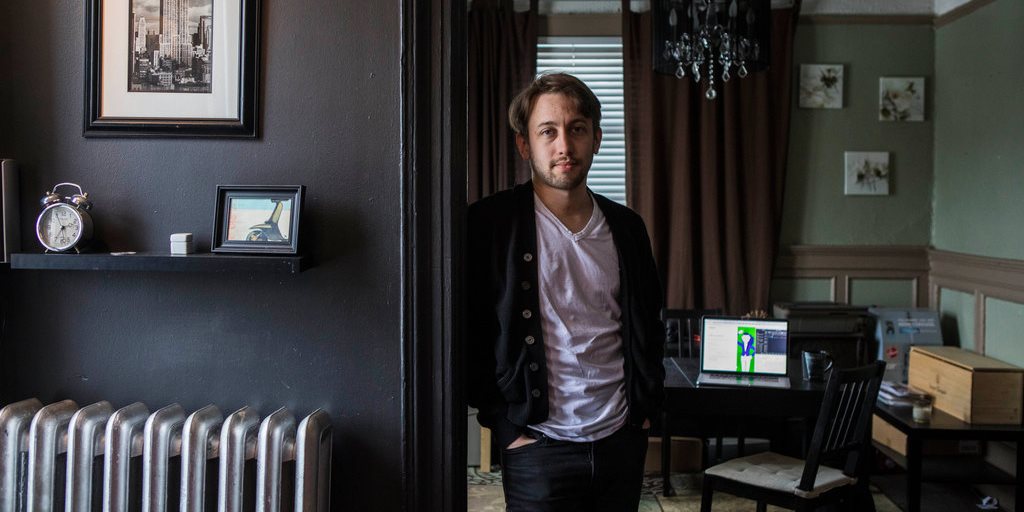 An undergraduate career stands as testament to liberal arts and sciences

Mark Hansen had his doubts about going to college.

He was a creative thinker with a flair for finding alternative paths.

“My parents pushed me to go to college,” he says. “I wanted to start a record label.”

So he compromised by studying sound recording and music business at a school in Connecticut.

But Hansen experienced a political awakening that caused him to rethink his future. He wanted to contribute to the public conversation about political and social issues, but in a way that would highlight overlooked perspectives and resonate with ordinary citizens.

“You can’t expect every person to have the time or energy to develop a stance on every problem,” he says. “So I feel that the best way to get people involved is through art, music, and mass culture.”

Convinced he needed a more comprehensive education, he transferred to Rutgers and began a relentless pursuit of knowledge.

I feel lucky that through fate, or through chance, I came to Rutgers

In the Honors Program in the School of Arts and Sciences, he took off in multiple directions with his studies, drawing intriguing connections between humanities, social and behavioral sciences, and fine arts. 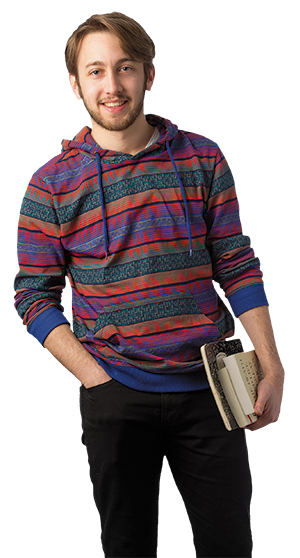 He graduated with degrees in American studies and visual arts. But he also focused on cultural anthropology, Middle Eastern studies, and political science.

Hansen describes his eclectic academic record as a response to a complex world facing complicated problems. It’s also a testament to the enduring appeal of the liberal arts and sciences.

“I felt it was better to have an understanding of many disciplines, rather than sticking with a single field,” Hansen says. “I felt that innovative thinking came from an interdisciplinary approach.” Indeed, this semester he plans to work with students from the Department of Biomedical Engineering on a mobile game/application aimed at detecting autism and other developmental disabilities in children. He is planning on a career in architecture, but in a capacity that goes beyond designing buildings. He wants to explore how architecture can help strengthen communities and contribute to civic life. Ultimately, he is seeking work that will benefit society.

“I feel lucky that through fate, or through chance, I came to Rutgers, and had resources at my disposal,” he says. “I have no excuse not to help those who did not have such luck.”

Programming friends are still making fun of me

As a student at Rutgers University, Mr. Hansen majored in American studies and volunteered for various community organizations. But after graduating, he was drawn to the tech scene and learned how to code.

By last year, he worked for Shotput, a supply chain logistics start-up based in Oakland, Calif. Backed by the hit-making incubator Y Combinator, Shotput offered Mr. Hansen a good salary and access to the Silicon Valley elite.

But the election rekindled his latent passion for civic engagement. He quit Shotput and decided to devote himself to repairing the country’s frayed social fabric.

After moving back home with his parents in New Jersey, he found a cheap apartment in New York and started Hey Mayor, a bot he hopes will bring 311 systems to small cities.

“This election was a reaction to people not being heard,” Mr. Hansen said. “A lot of that is the failure of state, local and federal governments to communicate with people.”

Mr. Hansen, who walked away from a nearly six-figure job to develop Hey Mayor, has not yet figured out how to pay himself. “My programming friends are still making fun of me,” he said. “They think I’m insane.”

His parents, too, have their doubts. “They’re constantly telling me to get a job at Johnson & Johnson,” he said.

A version of this article appears in print on April 16, 2017, on Page BU7 of the New York edition with the headline: An Election Serves As a Call to Work.  Read the whole article.