The son of a truck driver and nurse, Jonathan Finnerty says that studying philosophy and classics changed his life. 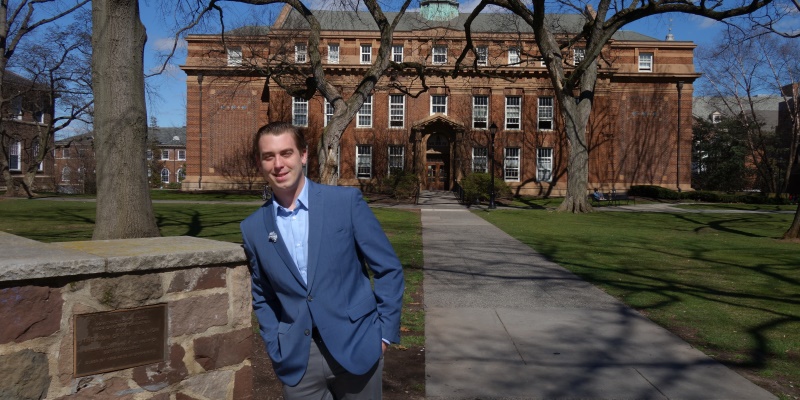 Jonathan Finnerty says that studying the humanities changed his life.

And as he prepares for graduation, the Edison native hopes to one day share the insights he absorbed from his double major in philosophy and classics with as wide an audience as possible.

“Whether you’re an auto mechanic or an academic, critical thinking is essential to your life,” says Finnerty, who graduated in May 2017 from the Rutgers University School of Arts and Sciences. “Philosophy and classics are not just subjects that sit in the ivory tower. They are deeply relevant to our everyday existence."

His own blue-collar background makes him especially aware of that relevance. The son of a truck driver and a nurse, Finnerty attended a vocational technical high school, exploring trades such as auto mechanics. But at Middlesex County College he took his first philosophy course, and fell in love with the field.

Sometimes people feel limited in what they can do. But one thing I learned is that with education, anything is possible.- Jonathan Finnerty

“I think I was always a philosopher, whether I realized it or not,” he said. “I read a lot, had opinions, and loved constructing arguments to support them.”

When it came time to transfer to a four-year university, Finnerty chose Rutgers over Columbia. The Department of Philosophy at Rutgers–New Brunswick is routinely ranked among the best programs in the English-speaking world.

“I came to Rutgers because of the reputation of the philosophy department,” Finnerty said. “And I have never regretted it.” But as he immersed himself

in his courses, he became intrigued by classical thinkers such as Plato and Aristotle. He yearned to read them in their original language so he started taking Greek classes in the Department of Classics, and eventually courses in Greek drama.

He came to see classics and philosophy as complementary sources in his own search for meaning. The synthesis provided him with intellectual rigor, analytical precision, a penchant for fearless questioning, and a concern for understanding the struggles and aspirations of ordinary citizens.

“The ability to reflect on the world as it is today, and to look out across the ages is

something I’ve gained from my studies,” he says. “That has changed who I am.”

Finnerty is current applying to graduate school in philosophy with a specialty in Greek philosophy. But his academic accomplishments have already won him a Jack Kent Cooke Foundation Scholarship, which funds four years of graduate study.

His ultimate goal is to teach.

“The most important task it to take what I have learned on this journey and share it with others, particularly with people who did not come from strong academic backgrounds,” he said. “Sometimes people feel limited in what they can do. But one thing I learned is that with education, anything is possible.”